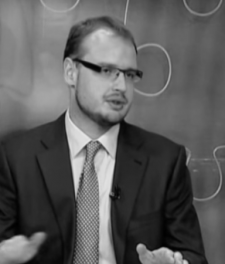 Chairman of the NGO "Foundation.101" Andrii Bogdanovych took part in the program "U tsentri uvagy" (In the Center of Attention) on the TV channel "Kyiv" and talked about the state of the entry-exit control points in Donetsk and Luhansk regions within the monitoring project "Frontline Inspection".

Could you please tell us about your research within the "Frontline Inspection" initiative? What do the monitors really see at the entry-exit control points?

Our project already exists for more than a year. Last year we decided to monitor the entry-exit control points on the contact line. Only two entry-exit control points worked in 2015 — "Zaytseve" and "Novotroyitske", so we monitored just them. Earlier this year we have completed the first part of the project. We have detected the existing problems and provided recommendations on how to eliminate them. Recently we have resumed our monitoring with the support of the UN Refugee Agency and the US Agency for International Development. Now we cover all five control points — four in Donetsk region and one in Luhansk region, where we have recently started our monitoring. Twice a week various monitoring groups come to the control points, record how the process is carried out. For example, how the check of people's documents and luggage is carried out, if any of people's rights are violated. Also, they check the conditions in general and see if the queue is long or not. Along with this we conduct the survey of citizens asking what they are mostly concerned about, what they would change in the work of control points and what their fears are. We already have the first results of the resumed monitoring for August and September. Interestingly, most respondents are concerned about the long queues. For example, in August 78% of respondents chose the problem of the long queues to be the major one. In September it is almost the same number — 77%. Moreover, the threat of attacks worried 27% of respondents in August, while in September this number has increased by 10% (37% of respondents).

How can you explain why ordinary people are more concerned about things like long queues than about the threat to life in the form of shelling?

First of all, those who live near the contact line, mention that they got used to shelling, they have emerged a certain barrier. The issue of personal safety is important to them, but these people have to live in such conditions, they don't have any other options. So they begin to pay attention to something like standing for 6-8 hours in long queues to pass the control point. The focus of concern shifts.

Tell us about the conditions at the entry-exit control point. With what items are they fully supplied and what do they lack?

If you ever crossed the border of Ukraine by car or bus, the entry-exit control point looks about the same. There is a little cabin where the inspectors are. The car drives up to it, and inspectors check the documents and baggage. There are certain limitations that are regulated by the Temporary order of control over the movement of people, vehicles and cargo with the occupied territory. It is approved by the Headquarters of the anti-terrorist operation. In this document the limits regarding the value of goods that can be transported, as well as its volume, weight and so on are specified. Accordingly, the guards conduct the passport control and the Fiscal Service checks the baggage that person carries. This is what happens at the control point. In order to get to it, people often need to stand in a queue. Sometimes there are no queues, but it is very rare. People can stand in the queue for 6-8 hours or more. Sometimes not everyone manages to pass the control point during the day, Therefore, these people have to turn back. Entry-exit control points work for a limited amount of time, their schedule depends on the season, it's usually open till the darkness. There were times when people spent the night in the "gray" zone, which is between the zero control point, after which the occupied territory begins, and the entry-exit control point. I want to mention that at the different entry-exit control points the "gray" zone may extend to 1-2 km, as at the "Stanytsia Luhanska", or to 30 km, as at the control point "Zaytseve". People could stay in the "gray" zone for the night, because they are not allowed to enter the occupied territories, since the "zero" checkpoint is closed and at the same time they could not pass the entry-exit control point to go back, because the working hours are over. Regarding the conditions at the entry-exit control points, the tanks with drinking water are installed at the most of them. At the "Zaytseve" there is even a separate tank with industrial water, which is periodically filled, so there are almost no shortages of water. Water is constantly present. There are bio-toilets and ordinary wooden WCs, but they are often dirty and rarely cleaned. It is pretty uncomfortable to use such toilets. There are also trash cans which are periodically taken out, but the roadside is often littered.

What is the infrastructure at the entry-exit control points? Can people buy meals, if they have to stand in a queue for hours?

The food is not sold at the entry-exit control points. There are tents set by the Ministry of Emergencies, where you can relax and drink tea during the cold season. There are shelters from the sun and rain, which were not there a year ago and we talked about this problem and wrote about it in our report during the first part of the monitoring. This year, the UN Agency for Refugees has set such shelters and benches there, where the elderly people can have a rest. Although when there are many people, they physically can't fit in.

Are there any heating points at the entry-exit control points? Also, can people from the preferential categories go through the queue faster?

In what situations does corruption occur the most?

If we generally characterize the work of the control points, the guards and fiscal service staff work quite professionally. However, it highly dependents on specific performers on the place. Firstly, there are several groups of inspectors who work in shifts at the entry-exit control points. Secondly, once a year there is a rotation of workers, so new border guards and fiscal service workers come from different groups and regions of Ukraine. For the most part everything works fine, but occasionally we record the facts of rudeness and incivility. And at the same time we record worthy acts when guards help elderly people with heavy bags.

Let's return to the long queues. Tell us please, what are the long queues related to? Why the process of document and cargo check is so long? Can it be simplified?

As for the reasons for crossing the contact line, according to our survey, visiting relatives is on the first place and shopping is on the second. About 30% of respondents cross the contact line to make purchases. In most cases, people go from the uncontrolled territory to the controlled one to withdraw pension and buy products. Then they return. This often takes place during one day and due to this long queues occur. One of the solutions to this problem was logistics centers that are now in the "gray" zone — between the "zero" checkpoint and the entry-exit control point. Logistic centers should have unloaded the control points, because, in fact, a logistics center is a market in which ordinary entrepreneurs sell different goods, mostly food. Also, a pharmacy and ATM can be there. But they do not perform their functions. Speaking of "Novotroyitske", there is a logistics center near the control point. Our monitors have an opportunity to check what is going on at the logistics center during their monitoring visits at this control point. Currently, a maximum of one or two entrepreneurs sometimes sell products there. Even if there is someone, he works only till noon.

What do you associate this dynamic with? Why is there such an active movement?

Currently, it is hard to name any reasons; it is precisely one of the objectives of our research. Logically, that with the opening of new entry-exit control points, people have more opportunities to cross the contact line. Earlier, people would go to a remote control point, and now it can be located right near their home. We also record cases when people, who went to the controlled area, due to the lack of money and permanent housing are forced to return to the occupied territories where they have at least an apartment. But I want to stress, that now I can't identify the key factors for increasing number of people at the entry-exit control points.

Let's talk about the safety at the entry-exit control points. From time to time there are attacks, so the control points have to be closed. Has the number of attacks increased?

Indeed, the attacks occur periodically. During the shelling entry-exit control points are closed if there is a threat to human safety. Our monitors report the following. For example, at the entry-exit control point "Stanytsia Luhanska" the distance between the "zero" checkpoint, after which the occupied territory begins, and the control point is very small. Now there is an urgent issue of withdrawal of troops from both sides, according to the Minsk agreements. When we were launching our monitoring in Stanytsia Luhanska, we spoke to some residents and found out that they are against the withdrawal of Ukrainian troops. Everything is very close to each other, so even 1-2 km withdrawal of troops is very critical. If the troops are withdrawn by these few kilometers, some administrative buildings and hospitals will remain without protection.

How do they express their position? By communicating with your monitors? Or do they somehow try to bring it to the attention of military and civilian administrations and officials?

We heard it in personal communication with locals. I can't say what is the position of majority.

How do inspection bodies perceive your work at the entry-exit control points?

Last year, there were cases when local border guards and representatives of the fiscal services opposed our monitoring. But now everything is fine. Perhaps local executors may not like it, but they agree that there should be public control. Currently, our monitors have access to all control points. And I want to point out that border guards cooperate well with us and periodically call us and ask what the situation at the control points is. It is clear that local representatives will report to the Administration of the Border Guard in Kyiv that everything works fine. But independent organization like us can reveal real problems. Therefore, they are also interested in such cooperation. We are in close contact with them. Border Guard Service cooperates with us the most, like nobody else does.