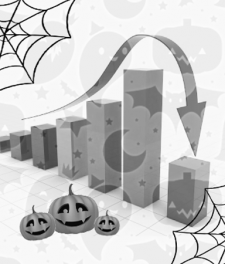 In this rating we will discuss the results of work of the Ukrainian authorities in October 2018. Over the previous month, users of the All-Ukrainian Complaint Service "KARATEL" received responses to 377 applications from 72 state institutions. This rating is formed based on their estimates.

In October, there was no responces from Poltava and Kirovohrad regions. However, Vinnitsia and Volyn regions have finally woken up. These 2 institutions were almost inactive during August-September. So coverage of our appeals in October reached 22 regions.

Three most active regions in terms of the number of received appeals and responses are Kiev, Kharkiv and the Dnipro. But Luhansk region has almost caught up Dnipro region. And all due to the increased activity of users from the city of Sieverodonetsk. To counterbalance, for example, Zaporizhzhia lost its position significantly which is the result of the inertia of local users.

In October, the following authorities responded to the requests of users of All-Ukrainian Complaint Service "KARATEL":

19 authorities were given the mark of "100 per cent", including Zakarpattia Regional State Administration, city councils of Chernivtsi, Rivne, Lviv, Zhytomyr, Vasylkiv, Irpin, Zhmerynka, Izyaslav, Husyatyn, Vynohradiv and several district administrations in the cities.

By the way, district state administrations in different cities of the country respond more effectively than the city councils of these cities. For example, Sviatoshynskyi and Podilskyi district administrations in Kyiv have a significant number of processed applications (19 and 7 respectively) closed almost by 80 per cent. In the meantime, Kyiv City State Administration has a significant decrease in its effectiveness in October. In September, 32 applications were resolved by 83 per cent, and in October, 34 applications were processed only by 64 per cent.

The result of at least 50 per cent was not shown by authorities in Dnipro, Bila Tserkva, and Kovel. And in Vinnitsia, Luhansk Regional State Administration and Kamianets-Podilskyi there were difficulties even with a single appeal. 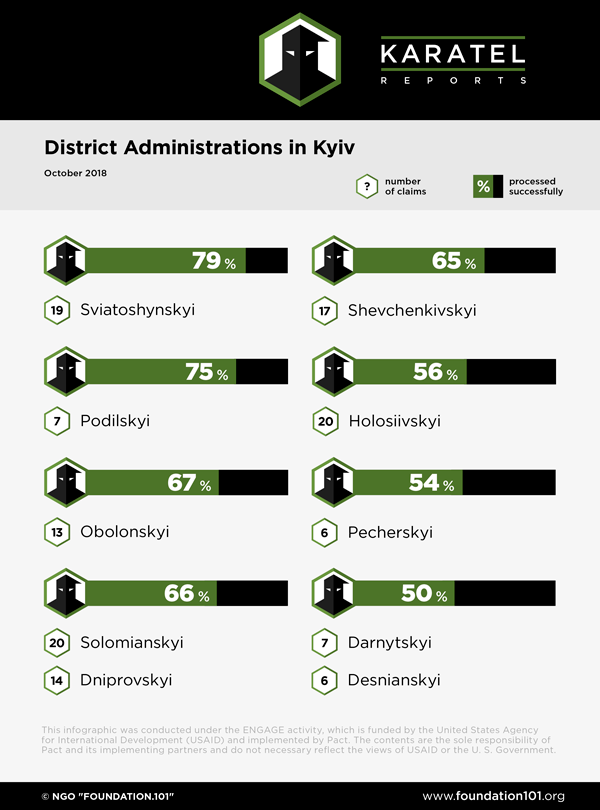 In general, the October rating of district administrations of Kyiv shows a decline in comparison with the figures in September. Eight out of ten districts authorities haven’t reached even 70 per cent efficiency. Darnytskyi and Desnyanskyi district administrations have become conditional outsiders of this rating. They have almost the same number of applications which were processed only by 50 per cent. 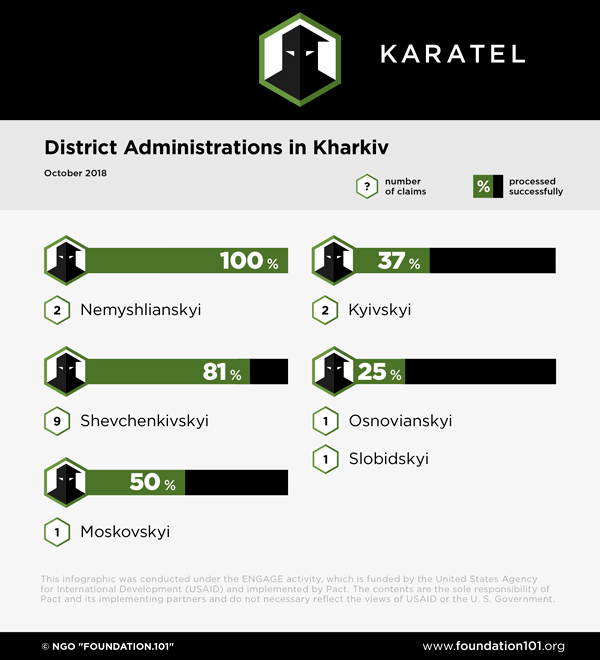 In Kharkiv, the effectiveness of district administrations of the city is much higher. Thus, in Nemyshlianskyi district, 2 appeals were processed by 100 per cent. At the same time, nine appeals with a fairly high score of 81 per cent were processed in Shevchenkyi district which were the highest number of applications among the district administrations of Kharkiv.

Officials of Osnovianivskyi and Slobidskyi districts failed to process effectively a single appeal.

In Lviv, three district administrations (Halytskyi, Lychakivskyi, Syhivskyi) received the highest rating from our users. In each of the listed instances, one appeal from the lawyers of Karatel was processed.

The largest number of applications was processed in Frankivskyi District Administration of Lviv City Council (4 applications by 94 per cent).