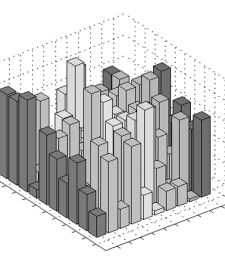 All-Ukraine Сomplaint Service "KARATEL", which accepts applications via so named mobile application, has summarized the work of authorities and private entities in April-May 2018. During this period 92 organizations of different levels ranging from national to regional in cities responded to 647 applications.

Over the period of two months the appeals from KARATEL covered 21 regions of Ukraine, except for the Transcarpathia, the Subcarpathia, Rivne, and Khmelnytskyi regions.

The lion's share of processed applications accrue to Kyiv and Kyiv region that is 344 responses. The second place in terms of the number of submitted and processed applications falls to users from Zaporizhzhia (56 responses), which, should be mentioned, was outside the "proactive" trio in the ranking for the first quarter of this year. Dnipro and its region change the second line from the previous rating to the third stage in this (47). It is noteworthy that almost half of the replies belong to the Dnipro users, instead of Kryvyi Rih (20).

Thus, the following institutions were assessed in April-May, 2018

20 state institutions completed their work on 100 per cent. Interestingly, the city councils of region centers and the region state administrations were not included to this list, but there are, for example, Main Departments of the State Service for Food Safety and Consumer Protection in the Donetsk and Kherson regions, as well as two national universities from Zaporizhzhia and Mykolaiiv.

In general, the processing quality equal to 50 per cent and above in April-May was demonstrated by 84 structures out of 92 represented in this ranking. In particular, the following institutions were not able to present a more or less acceptable result: Zhytomyr Regional State Administration (25 per cent), the Main Department of the State Service for Food Safety and Consumer Protection in Kyiv (0 per cent), Poltava City Council (46 per cent), Mykolaiivoblteploenergo (0 per cent). 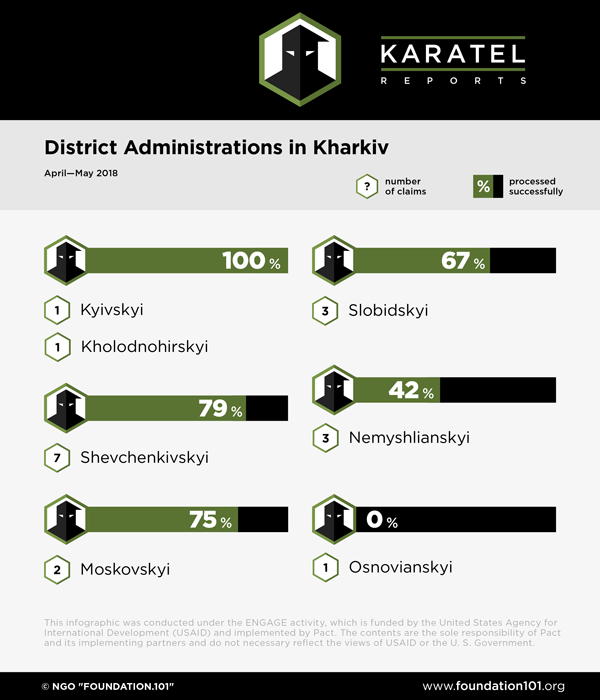 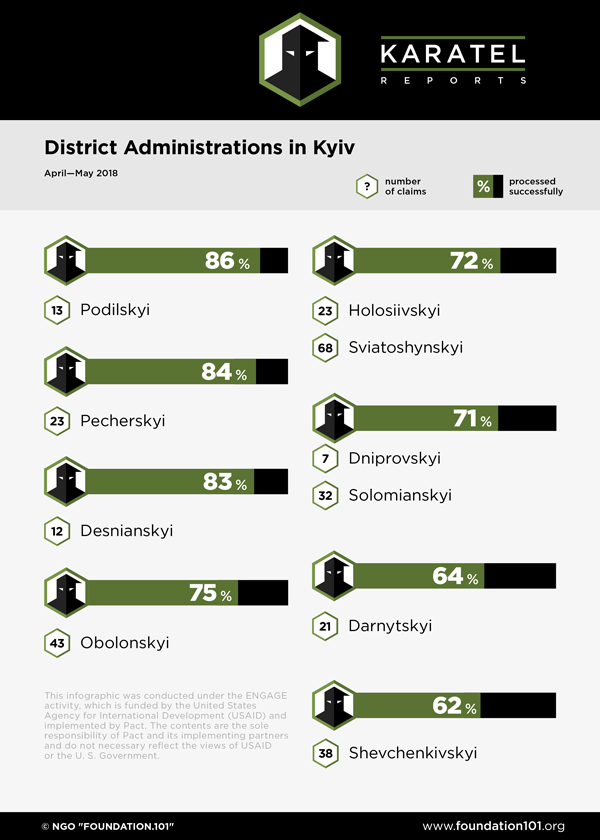 Significantly many requests from users of KARATEL were processed in the Sviatoshynskyi District Administration in Kyiv. And the productivity of 72 per cent for 68 applications is quite a good indicator. Although there is always room to grow.

The worst indicators are in Shevchenkivskyi District Administration in Kyiv. The head of the institution should consider this because the workers of the district where he presides managed to close 38 applications on 62 per cent. 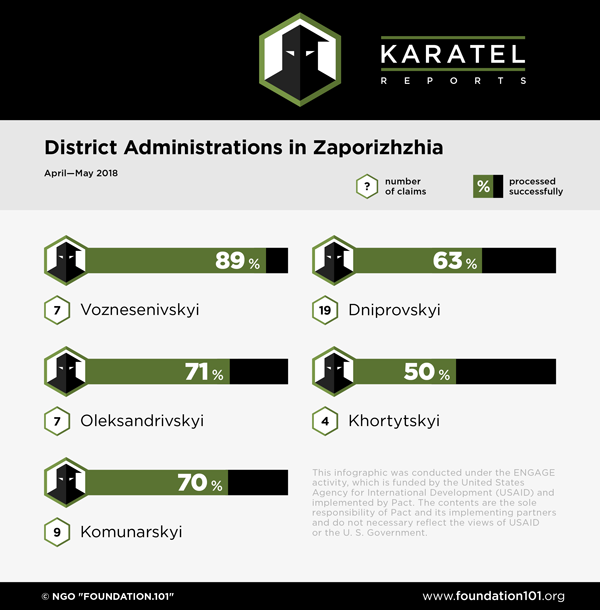 In this ranking, unlike the previous one, the effectiveness district administrations in Zaporizhzhia has significantly improved from 70 per cent to 89 per cent. Specifically this quality of seven applications` processing of KARATEL was shown in Voznesenivskyi district. The largest number of applications accrued to Dniprovskyi district — 19, however only 63 per cent were able to be processed. 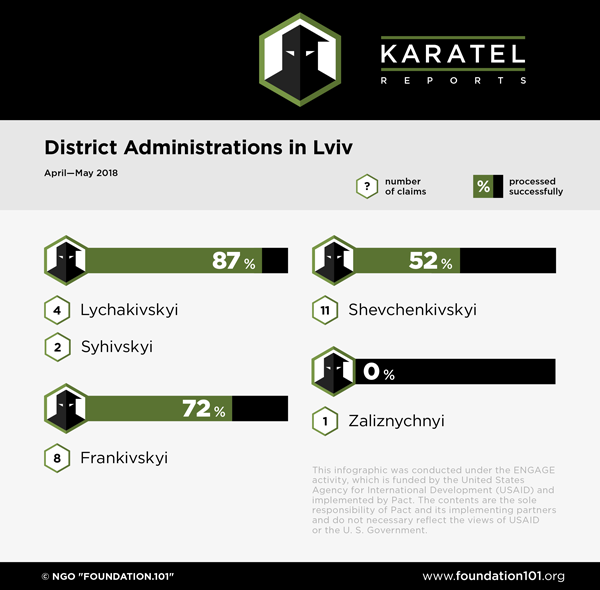 While no district administration received 0 per cent for its work in Kyiv and Zaporizhzhia rating, the situation is the opposite both in Lviv and Kharkiv.

The outsider of this ranking is Zaliznychnyi district. The management should consider the work of those subordinates who failed to deal with one letter properly — 0 per cent.

By the way, last time Lviv Regional State Administration stood out in November 2017. Then the situation was the opposite: Zaliznychnyi district ranked 1st and Lychakivskyi and Sikhivskyi were the last. However, the November`s outsiders demonstrated the performance of 50 per cent.