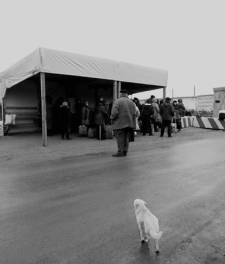 Twelve Million People Crossed the Line of Contact in 2017

After analyzing the dynamics of the intersection at each working control point in the Donbas, we have also summed up the total number of crossings in 2017, as well as outlined the dynamics of movement of people, discovered the preferable direction between controlled and uncontrolled territory over each month and over the year in general, and then the obtained data was compared with 2016.

Looking at the previous material that displayed the parallel between 2015 and 2016, it should be recalled that in 2015, there were only two operating control points for major part of the year. While in 2016, as well as in 2017, five checkpoints in total functioned during the year e.g. Mariinka, Novotroitske Mayorske, Hnutove (all of them in the Donetsk region) and Stanytsia Luhanska (the only checkpoint in Luhansk region).

Summing up the data for the last year, what's remarkable is that the number of crossings has increased by one third (more than 4 million people) than in the year before. For the second year in a row, there is a downward trend in the difference between the directions of the movement: 2015 — 2 per cent, 2016 — 0,8 per cent, 2017 — 0,2 per cent. 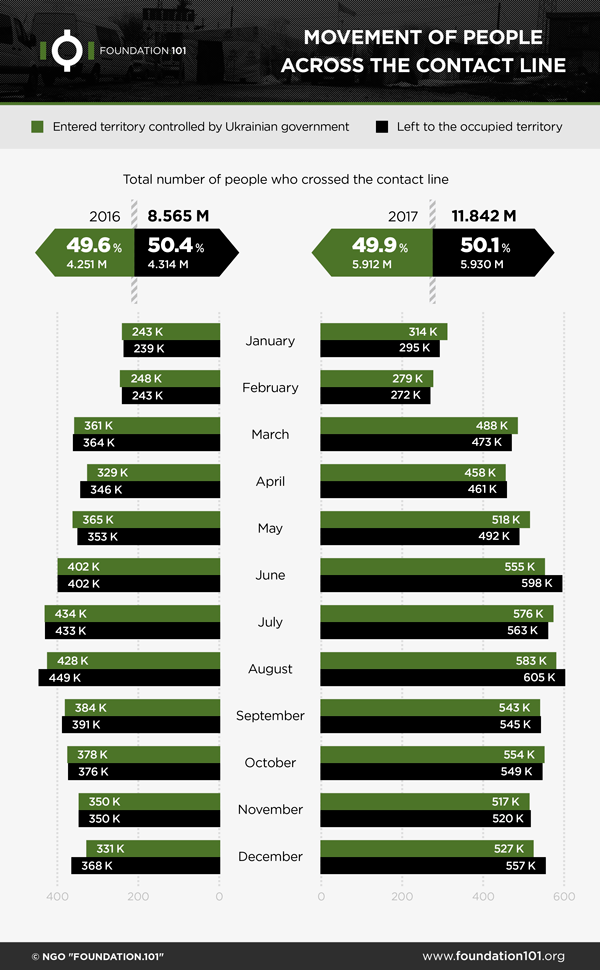 Looking at the dynamics of the intersection, there is a similar tendency: the smallest number of crossings is recorded in the first two months of the year, then in the spring, the activity of people is gradually gaining momentum (with a slight outflow in April); summer is the most dynamic of this indicator (possibly, due to a longer schedule of work of the control point in this period), and in autumn we see a decline in activity, although not to the indicators of spring. From May to December more than 500 thousand people per month crossed control points in the Donbas on both sides. But the level of 600 thousand people was recorded only once, in August, towards the uncontrolled territory. It seems to be a tendency that citizens cross the line of contact in the second half of each year more actively.

It should be noted that from January to May, people moved more often to the controlled area, while over the period from June to December, the direction towards uncontrolled territory was more popular. However, in general, the indicators of traffic directions do not have a significant difference, except several tangible surges in the direction of uncontrolled territory in June, August and December, when the difference between directions was equaled to at least several tens of thousands of people.