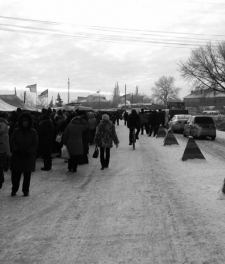 The Load at the Control Points in 2017

As in the past year, NGO "Foundation.101" analyzes the work of entry-exit control points on the line of contact in the Donetsk and Luhansk regions. In August, Foundation.101 presented the infographics of the intersection of the contact line during the first half of 2017. Now we suggest looking at the general trend of flow over the past 12 months.

In this material, Foundation.101 uses data from the State Border Service of Ukraine, which were provided in response to our official request to the institution. There are five operating entry-exit points in the Donbass: four in Donetsk region — Mariinka, Novotroitske, Mayorske, Hnutove, and one in Luhansk region — Stanytsia Luhanska.

Unlike 2016, control point "Mariinka" was the most loaded one in 2017. In the previous 12 months, the number of crossings in both directions was 2.899 million times. Besides, in 2016, the performance of this checkpoint did not reach the level of 2 million. It is noteworthy that in 2017, through the checkpoint "Mariinka", the flow of people was moving more towards the side of the controlled territory, although, in the last year, the situation was the opposite. For two years in a row, constant point is that after the winter recession in January-February, in March, the Mariinka inflow is rising substantially until December. In 2017, the peak of crossings occurred in the summer months, at that time people more actively entered the territory controlled by Ukraine.

The checkpoint "Mayorske", the most loaded checkpoint of 2016, in 2017, assumed 2.717 million people. The figure, compared with the preliminary data, has grown a little less than half a million. Just as in the previous year, more people were heading towards an uncontrolled area. However, the difference between the two directions in the past year was not so significant: in 2017, the gap was 1.2 per cent between those who entered the controlled area and traveled in the opposite direction, while in 2016, this figure was at 4.4 per cent. Also, the peaks of loading were different: the year before that, the checkpoint was most active in April-May, following with a gradual decline after that, but in 2017, it is possible to distinguish two influxes and both of them were in the second half of the year — in August and December. 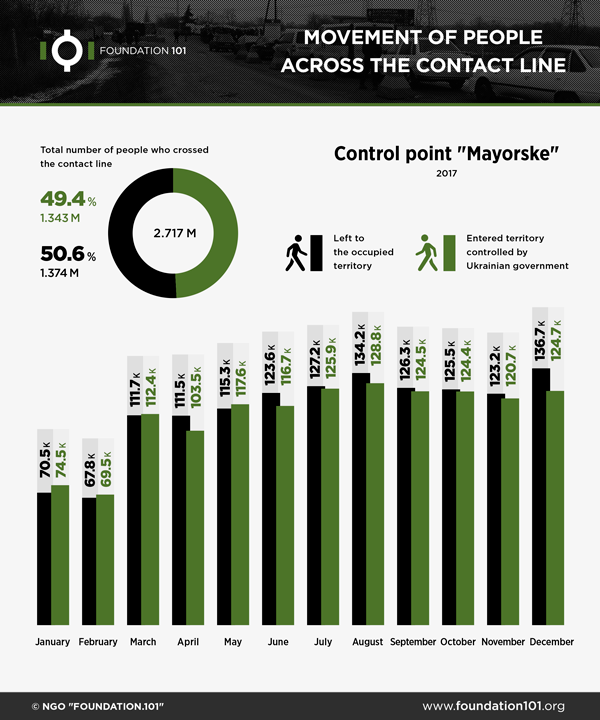 Unexpectedly, the checkpoint "Stanytsia Luhanska" ranked third place on the load, and not the checkpoint "Novotroitske", as we observed in 2016. However, the only entry-exit control point in Luhansk region assumed in 2017 the third highest number of people — 2.445 million. Compared to the last year’s data, the growth in this year reached more than 1.1 million people. In addition, in 2017, the movement towards the uncontrolled area was slightly more popular than towards the opposite side (a difference of 0.2 per cent), while in 2016, the gap was about 1.4 per cent and in favor of direction towards the controlled area. As well as in the previous year, a peak of the load occurred in August. 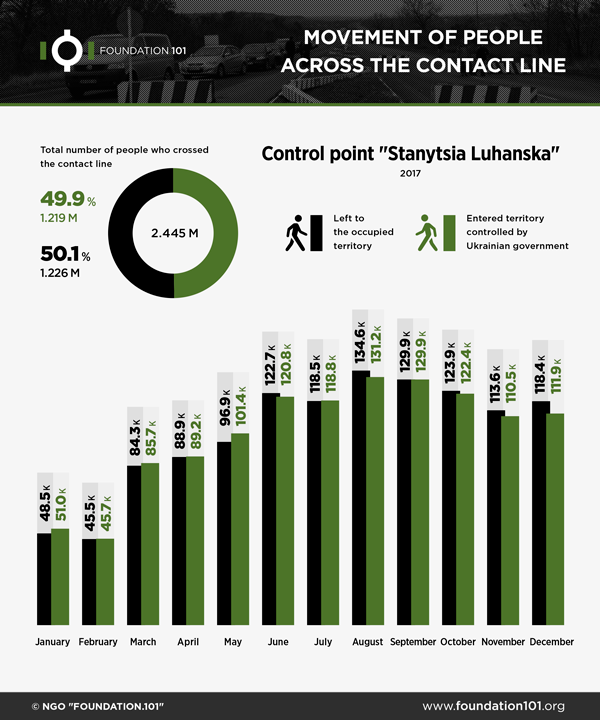 The checkpoint "Novotroitske" is slightly inferior to "Stanytsia Luhanska". In 2017, people passed through the control point 2.382 million times. There is a difference of more than 1 million compared to the figures in 2016. For two consecutive years, the movement towards the occupied territory remains more active, although in the past 12 months, the difference has narrowed sufficiently: 1.4 per cent in 2016 to 0.4 per cent in 2017. The peak load at this checkpoint fell to July-August, followed by a monthly decrease, as it was the year before. 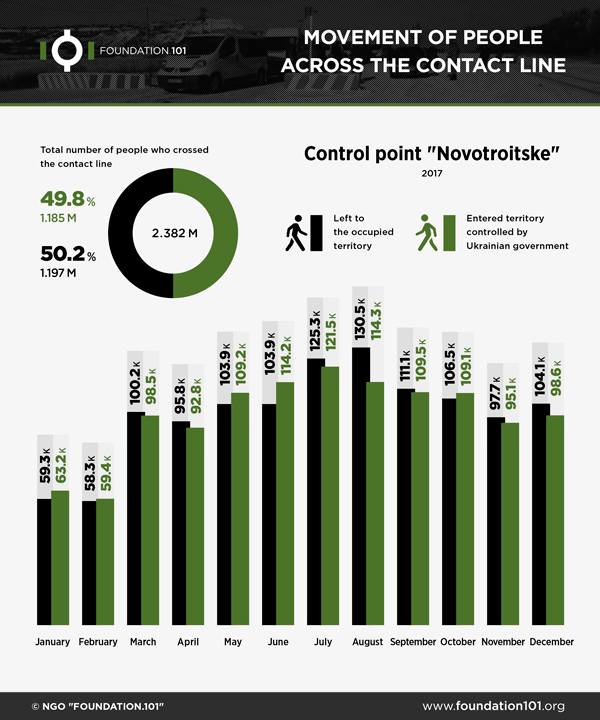 The smallest number of crossings (1.398 million) was recorded on the control point "Hnutove". However, this figure is still higher than the previous one by almost 300 thousand people. As in the previous year, more people were heading towards the controlled area. There were two peaks this year; besides, in March, the wave of activity touched the direction of "entry to the controlled area", and in June — "departure to the uncontrolled territory". Furthermore, as you can see on the chart, in June, the number of people who traveled towards the uncontrolled territory was about 50 thousand people bigger than those who traveled to the controlled area.