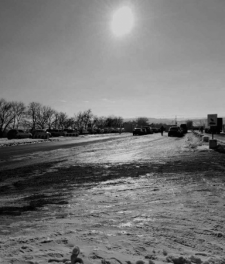 The Sanitary Conditions at the Entry-Exit Control Points in February

In February 2017 the observers of Foundation.101 conducted 19 monitoring visits to control points in the Donetsk region within the "Fronline Inspection" initiative. Our monitors inspected a current situation with drinking water, condition of toilets as well as a presence of litter on roadsides at the control points "Marinka", "Mayorske", "Novotroitske" and "Hnutove".

The control points "Marinka", "Mayorske" and "Novotroitske" were visited by monitors of the organization 5 times each. At the control point "Mayorske" there were no recorded problems with water, as well as with the condition of toilets, but there were three cases of littered roadside. At “Marinka” no questions appeared about the presence of drinking water and the condition of toilets, but the cases of littered roadside were recorded four times out of five monitoring visits. As for "Novotroitske", the toilets, especially those located on the territory of the control point are in a poor condition, also there are claims about litter on the roadside.

The monitors visited the control point "Hnutove" four times in February 2017. An awful condition of toilets from the side of the uncontrolled territory was observed during each visit. Also, the cases of littered roadside were recorded during each of the four monitoring visit.