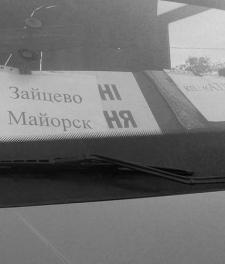 During the implementation of the "Frontline Inspection" project and monitoring the entry-exit control point "Zaytseve", NGO "Foundation.101" records numerous complaints from citizens about the crowds at the post of the first frontier, which is located on the contact line (the so-called "zero" checkpoint).

According to observers of the project, this happens because of the wrong organization of transport routes. Currently, a passenger bus heading from Bakhmut (Artemivsk) to the contact line has to stop and wait until citizens pass the entry-exit control point "Zaytseve". In cases, when there is a big flow of people, several vehicles can wait from the both sides. They can't continue driving until the check of citizens is completed.

"Because of this delay of buses near the "zero" checkpoint, there are no available vehicles that could take people from there to the control point. As a result, people are waiting at the contact line in unsuitable conditions, being constantly threatened by shelling", said the head of the NGO "Foundation.101" Andrii Bogdanovych.

According to the experts of the "Frontline Inspection" project, it would be better to organize transportation in a way that the passage control point by citizens does not affect the movement of buses. Specifically, divide the current route into two separate routes — from Bakhmut to the control point "Zaytseve" and from "Zaytseve" to "zero" checkpoint. In this case, regardless of the load at the entry-exit control point and the duration of the citizens' check, buses will be able to move freely by their schedule. In addition, it will encourage inspectors at the entry-exit control point to perform their duties faster. 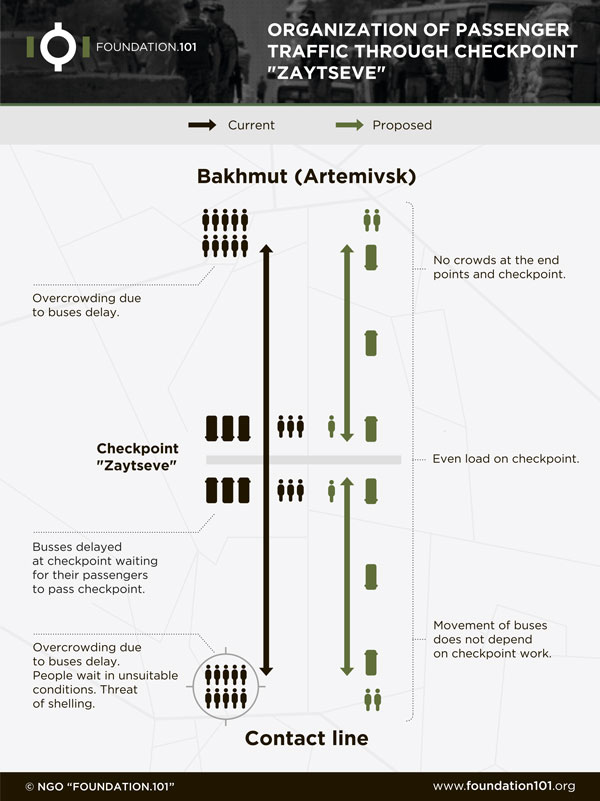 NGO "Foundation.101" has already sent its corresponding recommendations to the State Border Service of Ukraine and the Donetsk Regional Military-Civilian Administration.

First Deputy Head of the Donetsk Regional Military-Civilian Administration Yevgen Vilinsky supported the idea of such organization of passenger transport, but State Border Service opposed these changes because of security concerns. In their opinion, the crowd of people will move from the "zero" checkpoint to the control point.

However, as noted by Andrii Bogdanovych, citizens who are waiting at "zero" checkpoint are in much greater danger than they would be if they waited at the entry-exit control point.