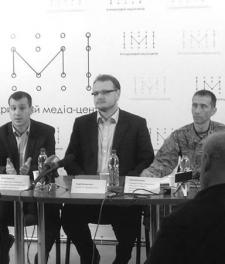 “Most inspectors at the control points are polite with citizens, but we recorded several cases of mistreatment and humiliation of people by representatives of Fiscal Service. I would like to note that the State Fiscal Service has ignored all the comments and recommendations we forwarded them based on monitoring results. In contrast, State Border Guard Service actively cooperates with observers and take the appropriate steps to resolve the problems” — Bogdanovych added.

Deputy Head of the Donetsk regional military-civilian administration Victor Andrusiv concluded that security measures at entry-exit control points that may cause inconvenience to citizens, primarily aimed at enhancing security for citizens who live in the free cities. Military and civil administration is making efforts to ease the situation related to the intersection of entry-exit control points. In particular, today the transfer between “zero checkpoint” to the free cities is organized on the basis of an interim agreement. But Administration plans to hold an open competition to select transferring organization shortly.

At the end of the briefing participants raised corruption issue. To date, Foundation’s observers didn’t record facts of extortion at entry-exit control points. However, during survey at the control points, people complain that one can pass the main queue and go directly to the shorter privileged one (for people with babies, elderly or people with disabilities) by paying 200 UAH. Therefore, “Foundation.101” will focus on recording such facts among its priorities. Also, the organization opened an opportunity to submit online claim for violations or other problems at entry-exit control points. Form for complaints is available at Foundation’s website.