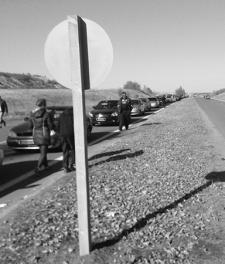 Andrii Bogdanovych on the Queues at Checkpoints

Chairman of the NGO "Foundation.101" Andrii Bogdanovych on Radio "Vesti" described the situation at the entry-exit control points "Zaytseve" and "Novotroyicke" in the Donetsk region. The organization conduct monitoring at the control points within the “Frontline Inspection” initiative.

Andrii, welcome at our Radio! The problem with the control points now is pretty obvious. Perhaps it could be solved by opening new entry-exit control points. Is it possible now? And can it really resolve the problem?

Foundation.101 conducts daily monitoring of the situation at entry and exit control points, including "Zaytseve" near Artemivsk and "Novotroyitske" near Volnovakha. We also fix the long queues at the control points - toward both controlled and uncontrolled territory. In our opinion, there are few reasons for that. Firstly, huge number of people cross the contact queue daily and in the same time there are only two enty-exit control points for two regions: Donetsk and Luhansk. Recently, when they opened the third control point, "Kurakhovo" that is relatively close to checkpoint "Novotroyitske" the queues at another checkpoint significantly decreased right away. And once the checkpoint "Kurakhovo" was closed due to the shelling, the queues at both checkpoints – "Novotroyitske" and "Zaytseve" – increased again. So the first problem, in our opinion, is the small number of the working checkpoints. In our opinion, they should increase the number of checkpoints because initially they foreseen six checkpoints but only two of them are working constantly. The rest are closed.

Andrii, do you record cases of corruption at the checkpoints? Are the processes there transparent and can you find out if something goes on?

Our monitors are located directly at the entry-exit control points. They can observe the work of Border guards and representatives of State Fiscal Service. So far we didn’t record any cases of bribery or extortion at the territory of checkpoints. Yet, there is another moment. There are two queues to the control point – the main one and the preferential ones. The preferential queue is created for elderly passengers, people with babies who are younger than 1 year old, and for people with disabilities. They don’t wait in the main queue for hours but go directly to the shorter, preferential queue and therefore they can also cross the control point quicker, too. We had few complains that people pay to get into the preferential queue. At the moment our monitors didn’t record these facts so it is rather a rumor so far. We can’t confirm or refute this information so far but we are working on it.