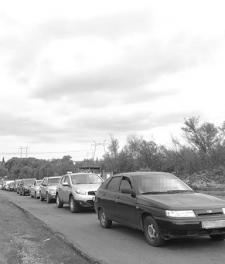 Monitoring of the Checkpoint "Zaitseve"

From September 15 to October 15, 2015 NGO “Foundation.101” have carried out daily monitoring on entry and exit control point "Zaitseve" (road corridor "Horlivka-Artemivsk") in the Donetsk region. The activities were implemented within the “Frontline Inspection” initiative of the organization.

The monitoring showed that inspection of vehicles on the control points goes quite fast (the average estimated time spent on one vehicle is 1-3 minutes). Nevertheless, observers recorded long queues of vehicles near the control points every day. According to the NGO "Foundation.101", it is caused by the great number of people who cross the contact line every day while there are only two working entry and exit control points in the Donetsk and Luhansk regions (near Zaitseve and Novotroitske settlements)

Another factor that causes queues is periodic absence of electric power and / or Internet connection at the territory of control points that stops the process of inspection of vehicles and people.

The observers of the "Foundation.101" did not record gross violations of human rights and cases of bribery by the inspectors. However they noted few cases of rude treatment of citizens as well as humiliation of human dignity by the employees of the State Fiscal Service of Ukraine.

Observers also recorded cases of the absent representative cards (badges) on the representatives of State Fiscal Service, which complicates the identification of persons in cases of violations.

Сitizens who cross control points by bus and on foot complain on the lack of benches for the eldery as well as lack of shelters or tents to hide from sun and rain.

As the result of the first month of the monitoring NGO "Foundation.101" forwarded its recommendations to the authorities in charge of the work on control points.