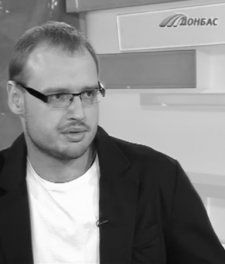 The chairman of the NGO "Foundation.101" Andrii Bogdanovych has participated in the show "Vsim Svitom" at the TV channel "Donbass". He spoke on the first results of resumed monitoring at the entry-exit control points on the contact line in Donetsk and Luhansk regions, as part of the "Frontline Inspection" initiative. He also mentioned the problems that were solved at the control points over the last half a year based on Foundation’s previous recommendations as well as the problems that still need to be resolved.

Six months ago you talked about the results of the first part of the project "Frontline Inspection", particularly about the recommendations and conclusions that you have made on the results of monitoring. Has something changed at the entry-exit control points after that?

We have conducted our monitoring since September 2015. In February 2016, we have completed the first part of it and then published the results of monitoring in report, which was sent to the authorities with our recommendations on the problems that we have identified. In August 2016, we have resumed the monitoring and recorded certain changes that took place. For example, we recommended refreshing and replacing the signs about mined area along the road in the gray zone. Let me remind you that this was a serious problem. Previously, these signs were either in poor condition or too small, or they were not set at all. Also, the fact that needs to be mentioned is that previously we worked only at the entry-exit control points "Zaytseve" and "Novotroyitske", but now we also cover "Mariinka" and "Hnutove". We record that the warning signs about mined roadsides are set at all control points. This is good, because there were cases when people triggered the tripwire, when they went down to the roadside in the gray zone that is totally mined.

Tell us more about the goals and methods of your work in terms of the project "Frontline Inspection".

During the first part of our project monitors worked at the control points daily and watched how the documents and people's goods are checked, and generally watched if the human rights are followed during the process of crossing the contact line. This was supported by the office of the Human Rights Commissioner of Verkhovna Rada of Ukraine and the Donetsk regional military-civilian administration. Now we are able to cover all four entry-exit control points that are currently working, but we have reduced the number of visits. Now, our monitors do not go to the control points every day, but they monitor each of the four control points twice a week. We keep monitoring whether the human rights are followed. But now we put more emphasis on conducting a survey of citizens who cross the contact line to find out what they are concerned about most, what issues they consider a priority, what they do not like. This is done in order to explore public opinion better.

Do people willingly communicate with observers?

What do they talk about most often?

Recently we have published the first results of our survey. People's biggest concern are long queues — about 78% of respondents pointed that out. And almost three times less people are concerned about the threat of attacks. So the issue of long queues is a bigger priority than possible shelling.

What problems at the entry-exit control points that your monitors have recorded were not solved, or even got worse?

I would like to emphasize that the report with recorded problems which we have published earlier is a recommendation. We are a non-govermental organization that does not impact directly on solving these problems. We can only bring attention of relevant authorities to these issues. We also inform international organizations that can somehow influence the issues. The problem with long queues is what currently remains unresolved. Although the number of control points has increased, there are still long queues (only two entry-exit control points worked in 2015 in Donetsk region — "Zaytseve" and "Novotroyitske". Four checkpoints in Donetsk region are active now and work almost uninterrupted. "Mariinka" and "Hnutove" were added. Also there is a pedestrian control point "Stanytsia Luhanska" in Luhansk region). We can't say that the check of documents or goods is intentionally delayed. It is quite professional, but the queues still remain long. Objectively, a lot of people cross the contact line, therefore control points are overloaded.

Does the resumed monitoring include the control of law enforcement agencies?

Of course, our monitors watch the way the documents and the goods are checked. The fact that we focus more on communicating with people does not mean that we do not pay attention to the work of border guards and fiscal service workers.

What is your previous estimation of the work of law enforcement agencies?

What do you think is the reason for long queues at the control points in recent weeks?

It is difficult to say 100% exact reason why the flow across the contact line has increased so much lately. However, this can be associated with the beginning of the new academic year. I would also like to draw attention to logistics centers — the markets that are built in the gray zone that are supposed to address the issues of reducing the load on the control points due to the fact that people who are leaving the uncontrolled territory can buy everything they need there, including food. These people are sent to a general queue, even though they had to be put in a separate one. They should be issued control vouchers with which they can't cross the control point, but can get to the logistics center. As they explained in the State Border Service of Ukraine and the Headquarters of the antiterrorist operation, most people blocked the passage of those who went out of the queue, believing that they just want to pass by without waiting in a queue. Such conflict situations happened to people who went to the logistics centers. It is hard to say how true it is, because this happened in the gray zone that is unavailable for our monitors. But it was the explanation of why people can't go to a logistics center in the separate queue.

Also, there is another issue. At the moment there are almost no sellers at logistics centers. Speaking of "Novotroyitske" there is a logistics center right near the entry-exit control point. Our monitors record every time that there are usually one or two sellers who work only till noon. As you can see, this is a vicious circle: if people reach the logistics center, they still can't buy all they need because of a small range of products, and sellers do not want to come because of very few customers. In my opinion, the local administration or the military-civilian administration should encourage sellers to work on logistics centers and inform people that it is better to buy needed goods on the logistics center than to cross the entry-exit control point and go to the store. In fact, the main flow of people who went through the control point is because of this "gastronomic tourism".

How much would the Logistic centers unload the queue? And did your monitors come across the situations when the queue was artificially created or increased?

Regarding the first question, it would pretty much unload the control points. Because most people who cross the contact line, travel to the controlled territory to purchase food or to withdraw pensions from the bank cards. Regarding the second question, we have not recorded the intentional creation of queues. The only thing that I would draw attention to is "entrepreneurs" who sell places in the queues. For example, they take a place in the queue in the morning and keep it, and then later on they sell their place in the queue. From the legal point of view, there is no violation in this though it is definitely a cheating and unfair game.

Do you know anything about the super privileged queue?

I hear such definition for the first time, but there are problems with the special queue. Usually, this queue is used by the elderly, people with babies up to one year or people with disabilities, but occasionally people who do not belong to any of these categories end up there. And when we asked people in the queue how much it would cost to get there, we hear about the sum of 200 UAH. This is what authorities fight with, and the Border Guard as well. They occasionally catch their employees and publish information about it on the online service. However, as I said, it all comes down to the workers in the field.

What recommendations will you send and to whom?

Our monitoring was resumed only a month ago, and we have not prepared any fundamental recommendations yet. Currently we have summed up the first results of a survey of citizens who cross the entry-exit control points. There are two main concerns, which are the long queues and the threat of attacks.

In your opinion, how these two problems can be solved?

I believe that if logistics centers performed their functions from the beginning, it would significantly unload the entry-exit control points and decrease the queues.