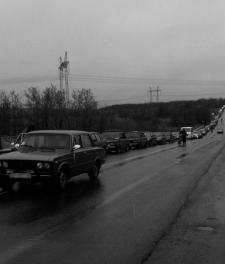 Results of the Survey of Citizens Who Cross the Contact Line

A quarter of people crossing the contact line make it very rarely or for the first time.

The survey shows that 42% of citizens cross the contact line more than few times a month, another 23% — on average once a month, 20% — several times per quarter or less. It is worth noting that another 15% of respondents crossed the contact line for the first time.

This is due to the presence of two separate queues at the control point, operating for people that cross the contact line by private or public transport.

However, the survey shows that those who cross the contact line by public transport tend to travel less frequently than those who travel by own cars. This may be due to two things. First is inconvenience of transfer from one bus to another for those who choose public transport, especially when traveling with heavy luggage. Second is greater business activity and, therefore, the need to travel to different distances by those who have funds for their own vehicles.

Almost a quarter of respondents have admitted that they received offers to speed up the review of documents for making permission to cross the contact line for a certain fee. When we asked about where these offers came from, 30% of respondents said that they were from the representatives of authorities and inspection bodies, 21% — from business, and 49% — from private individuals.

Out of the most exotic "corruptive service providers" respondents mentioned a notary from Horlivka. People also testified that there are "corrupt" advertisement about speeding up the review of the documents for a certain fee in the Internet, including the social network "Vkontakte".

NGO "Foundation.101" does not exclude that after the introduction of the electronic submission of documents for obtaining a permit, offers from private individuals could be fraudulent. For example, individuals or businesses promised to speed up the review of documents for a fee at the same time taking money from person on the bribe and filing all documents by standard procedures, which people could make on their own.

Also monitors of the project have regularly recorded complaints from the public regarding the cases of bribery from the border guards for the opportunity to cross the entry-exit control point without waiting in general queue.