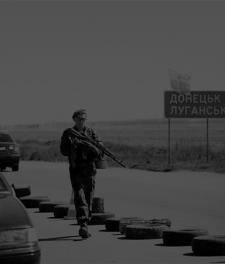 Report On the Results of Monitoring Control Points "Zaytseve" And "Novotroyitske"

The report with recommendations is prepared on the basis of monitoring the situation at the two entry-exit control points in the Donetsk region "Zaytseve" and "Novotroyitske". The monitoring was conducted as a part of "Frontline Inspection" initiative from September, 2015 to February, 2016.

The monitoring was conducted by observers of the NGO "Foundation.101" in partnership with the Ukrainian Parliament Commissioner for Human Rights and Donetsk Regional Military-Civilian Administration and with the support of USAID and People’s Project.

As part of the monitoring of entry-exit control points "Zaytseve" and "Novotroyitske", organization’s representatives were there full-time on a daily basis and monitored the observance of human rights.

Based on the monitoring, experts of Foundation.101 have identified a number of problems that need immediate solutions. The most urgent issues are as follow:

In the report Foundation.101 presents a brief overview of the problems and proposals for their solution.

In the opinion of Foundation.101, the A4 size of these warning signs is not big enough. That is the reason why most signs do not attract sufficient attention of citizens. Because of that, periodically, some people trigger the mines and die while walking or driving along the side of the road.

For example, on November 2 a 63 year old resident of Luhansk region triggered a mine tripwire near Berezove.

A month before the incident, NGO "Foundation.101" drew the attention of the State Border Service of Ukraine and the Ministry of Defense of Ukraine to this issue, but it has not been resolved.

It is worth noting that cases of citizens getting maimed, wounded or killed by mined explosive devices are rather common. In general, according to the National Police of Ukraine, 12 people triggered a mine tripwire near the village of Berezove. Explosions mines are also recorded near other entry-exit control points. For example, in February 2016 four people traveling in a vehicle triggered a mined explosive device near the entry-exit control point of "Maryinka".

In the opinion of the NGO "Foundation.101", larger signs and wired fence must be set in order to demarcate known minefields or demining of a specified territory must be conducted.

Observers of the project have regularly recorded numerous complaints from citizens in crowds near the checkpoint of the first turn, so called "zero" checkpoint. This happens due to suboptimal organization of transport routes.

Currently, the passenger bus heading from Bakhmut (Artemivsk) to the contact line is forced to stop and wait for its passengers to pass the control point "Zaytseve". In case of a large flow of people, several vehicles from both sides wait and are unable to continue the movement until the inspection of their passengers is over.

Because of the buses’ delay at the control point, there are no available vehicles that would take people from the checkpoint of the first turn and to the entry-exit control point. As a result, people have to wait at the contact line in unsuitable conditions, constantly being threatened by attacks or shelling.

NGO "Foundation.101" considers that an alternative organization of passengers’ transportation might solve this issue. An alternative organization suggests division of the route into two separate ones: first from "zero" checkpoint to entry-exit control point, and second from the entry-exit control point to Bakhmut. This way, passage and inspection of citizens does not affect the movement of buses and makes it more efficient. In this case, regardless of the load on the control point and length of citizens’ inspection, buses can move freely according to their schedule. 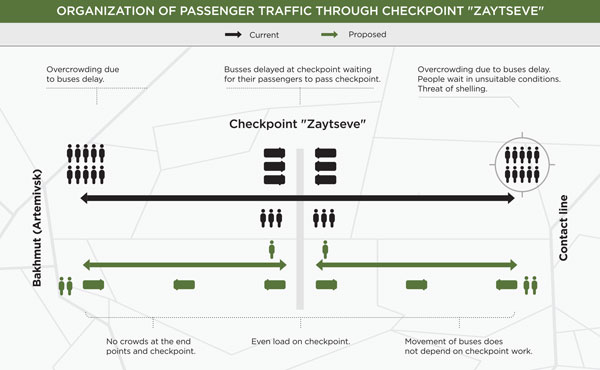 Observers of the project have often recorded the facts of crossing the contact line by children with their parents.

According to the norms of temporary order of control over the movement of people, vehicles and cargo (goods) across the contact line within Donetsk and Luhansk regions, children can leave the uncontrolled territory with either parent, while entrance to the uncontrolled territory is possible only when both parents are present, or a letter of attorney from the absent parent is presented.

NGO "Foundation.101" considers this rule correct, but notes that the facts of citizens’ ignorance about the difference of mentioned procedures are regularly recorded. Because of this, in many cases when one parent leaves the uncontrolled territory with a child for a short term they are unable to return home because they do not have the letter of attorney from the other parent.

For example, during the monitoring, such cases were registered in at least 19 daily reports of Foundation.101 observers. It emphasizes the relevance and consistency of the problem.

In opinion of the NGO "Foundation.101", it is necessary to personally inform parents who travel with children about such a rule at the control points and set special signs with information about it at the entry-exit control points.

4. ROUGH ATTITUDE OF THE REPRESENTATIVES OF INSPECTING AUTHORITIES

Observers of the project have periodically observed and recorded intolerant and even rude treatment of citizens by inspectors at the entry-exit control points.

Sometimes there are cases of outright arbitrariness when, for example, citizens may be sent to the end of the queue only because the inspector did not like them. It should be mentioned that the number of complaints about rough treatment by the inspectors has significantly increased at the entry-exit control point "Zaytseve" after the rotation of border guards in October-November of 2015.

Also the case of damaging citizens' personal property by the military was recorded. In this respect, the NGO "Foundation.101" has appealed to the State Border Service of Ukraine and the Ministry of Defense of Ukraine, but there was no positive solution to the situation.

In the opinion of the NGO "Foundation.101", it would be good to conduct special training for staff who works at the entry-exit control points in order to reinforce the importance of treating citizens and their belongings respectfully.

In a survey of citizens, observers of Foundation.101 have recorded complaints about corruption. Principally concerning the question of obtaining permission to cross the contact line.

In a survey of citizens conducted during the monitoring at the control point "Novotroyitske", 31.5% of respondents admitted that they have received offers to speed up authorization in exchange for a bribe; 3/4 of them stated that the proposal came from individual civilians who do not represent inspection bodies and a quarter reported offers from the authorities or representatives of inspection bodies.

Foundation.101 does not exclude that after the introduction of the electronic submission of documents for obtaining a permit, some proposals from private individuals could be "fraudulent". For example, individuals or businesses promised to speed up the consideration of documents in exchange for a bribe, but at the same time took the bribe money and submitted all documents through the standard procedure without themselves paying the bribe to the authorities to expedite the permit approvals.

Also, the observers of the project have regularly recorded complaints from citizens regarding cases of bribery by border guards in exchange for the opportunity to cross the control point without waiting in the general queue.

According to citizens, the amount of bribe expected to be paid for the opportunity to get into a preferential queue with no justification is 200 UAH. Some people noted that it is their own initiative to give a bribe to a regulator to get into the privileged queue to speed up the passage of the entry-exit control point.

Foundation.101 considers it necessary to increase the control over the work of employees who organize the movement of vehicles at the entrances to control points.

Observers of NGO "Foundation.101" have regularly recorded the facts that people who intend to get to the Logistics Centers have to go to the common queue while crossing the checkpoint of first turn, where people who travel toward the entry-exit control point wait in order get to the controlled area.

Therefore, the point of using logistics centers is lost as it is more beneficial for citizens to pass the control point and buy all the needed products on the territory controlled by Ukraine.

In this respect, the NGO "Foundation.101" has appealed to the State Border Service of Ukraine and the Ministry of Defense of Ukraine, but there was no positive solution to the situation.

In opinion of the NGO "Foundation.101" it makes sense to organize the system of admission through the checkpoint of the first turn in the way that citizens who intend to get to the logistics center could pass without waiting in the common queue.

7. LARGE QUEUES AND A LONG TIME OF PASSAGE THROUGH THE CONTACT LINE AND ENTRY-EXIT CONTROL POINTS

The main problem in the intersection process is long queues and the amount of time required for passage. Observers of Foundation.101 have received complaints from the public about this problem almost every day. Moreover, Foundation.101 has repeatedly recorded the cases when people who did not manage to pass the control point before its closure had to sleep on the road in their car or go back to the city in search of lodging for the night.

However, Foundation.101 has identified factors which may be applied in order to reduce queues and speed up citizens’ passage through the contact line and entry-exit control points. These measures include in particular:

Observers of the project have periodically faced the resistance of the inspection bodies during the implementation of the "Frontline Inspection" initiative.

NGO "Foundation.101" considers that such actions are directly connected to its activities and regular complaints to the relevant authorities.